I meant to write this one a lot sooner but moving house and a busy Easter at work means I am several weeks late in writing my 100th post on this blog! Thank you for reading everyone. The good news is that a lot has gone on in the last month and there were plenty of pictures taken so lets dive straight in and see what we have been up to...
We have been monitoring the pitfall traps along the inside of the newt fence every day, and now that temperatures are starting to rise we have been finding newts and safely transporting them to the other side of the work site. Ecologist Ross Jones has been helping us to set up and monitor the traps as well as teaching the staff and volunteers a bit more about them, including the importance of having a licence to handle them - hence here he is, fully licenced!
﻿﻿﻿﻿ ﻿﻿﻿﻿ 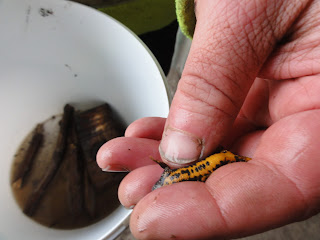 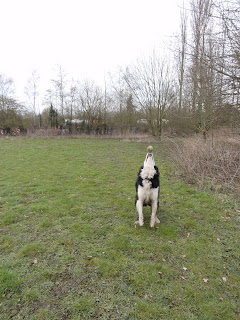 We have planted up a new orchard on one of the Estate farms with over 60 apple trees, which will provide fruit for the apple press for future harvest fairs. We planted a good mix of cooking, eating and dessert apples to ensure that the juice will be a tasty combination of sweet and tart, and next year we plan to extend the orchard to include plums and pears (and if I get my way, quinces and medlars!). The snow was still on the ground when we planted, so our hardy volunteers had to scrape away the white stuff, dig the holes, fertilise the roots, carefully plant the trees, fill in, stake, rabbit proof and put a mulch mat on every one with some numb fingers but everyone thoroughly enjoyed themselves. We had one extra in our group that day - the resident farm collie was determined to spend the day with us and continually brought us gifts of sticks and balls to be thrown. At least chasing him around kept us warm! 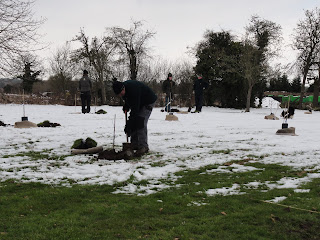 ﻿Thankfully the snow was long gone by Easter and we actually had some dry weather! Thousands of people came to the park over the long weekend to take part in the easter egg trails, egg and spoon races and games. We also has an archery weekend which proved very popular with children and adults alike - some of the warden volunteers came in just to have a go. I have some photos of Phil, Jen and David - they will follow shortly (thank you Martin!)

﻿﻿
The long cold winter has meant that the planting season could be extended so as well as our original 10,000 hedge plants we have also managed to plant another 2,000 hawthorn, blackthorn and hazel and 250 conifers - some of these extra plants have gone into hedges, some into future coppice and some into a plantation on the deer park which will provide cover and food for the deer in years to come. Now, the plants are coming into bud and leaf so the planting season is finishing - just the last few to go in tomorrow and Monday.

﻿ ﻿
﻿﻿
The new seasons jobs have started for the wardens already - down on the river meadows we have been clearing the flood debris off of the fences and repairing the posts and wires where the sheer force of the water has damaged the boundary. It was also a good chance for a litter pick - so many plactic bottles etc. get dumped on our land every years as the floods recede. This year my dog Max benefited from the clean up too - with seven tennis balls, two footballs and a frisbee all presented to him by the volunteers. A happier dog has seldom been seen! 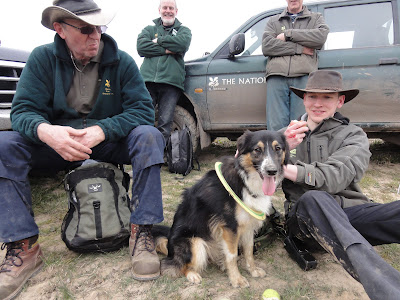 ﻿﻿
Back in the park, work has begun on a new bird hide area in the woods at the north end of the Mile Walk with Craig leading small teams in making willow hurdles to screen people away from the birds. In time, there will be feeders and bird boxes to watch and if it proves popular, more hides could follow in the near future. 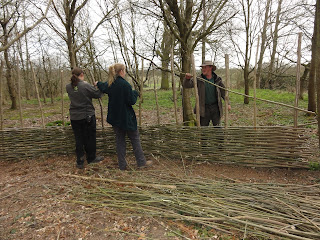