I got a call over the radio today from some of the House staff who had found a young carrion crow that had slipped through some railings and was trapped in the drainage tunnels in front of the house. I grabbed a net and went down to see what could be done and ended up crawling through the tunnels with fellow staff member Kevin to net the increasingly upset bird. I managed to get him and then put a large cloth over him to calm him down, then carefully picked him up and climbed back through the drain and through a window back into the house, and went to the outer courtyard to check him over and release him. Luckily there were no injuries and after disentangling his claws fromt he net, he flapped off to the roof with some very loud squawking. Successful rescue!

Today we also had a team go over to Sunnycroft, our sister property in Wellington, to set up the marquees, tables and chairs for their Summer Fete this weekend; meanwhile another team got stuck into clefting some oak to replace some of the park pale fencing around the deer park.

It has been a gorgeous week so far, weather-wise, and there has been a lot of opportunity to take photos so here are a few of my latest sightings:

Posted by Joy Margerum at 22:13 No comments:

﻿﻿﻿﻿ ﻿﻿﻿﻿﻿﻿
﻿﻿﻿﻿﻿﻿﻿﻿﻿﻿﻿﻿﻿﻿﻿I was not too impressed when my alarm went off at half past six this morning - it was the staff barbecue last night and when everyone else went home, a few of us went back to my place to carry on the fun - but after a few hours of clearing up the tables etc. in a refreshing rain shower, all is well in the Attingham world once more. We have been doing a lot of work along our newly-planted hedges over the last few weeks, clearing the grass and weeds with brushing hooks and scythes and spraying to give the hedge plants the best chance of getting enough sunlight and water. This morning I took the opportunity to check on the black poplars that we planted back in April to check that they were not getting choked by nettles and cleavers; I'm proud to report that they are doing well, with plenty of green leaves and few signs of being nibbled by the local deer. As I drove back across one of our farms I stopped to admire the poppies that are growing along the headlands in in some of the crops - they look absolutely gorgeous. We always get a fantastic display of poppies in one of the fields at Berwick New House Farm - if you walk around the Mile Walk keep looking through the trees as you approach the suspension bridge from the Walled Garden.﻿﻿﻿﻿
﻿﻿﻿ ﻿
﻿ ﻿
The fawns are starting to be a frequent sighting ﻿now that we are on our way to July - they can be seen following the does and can easily keep up if mum decides to run! Pictures to follow but if you want to see them for yourselves, why not come along the Attingham Summer Nights events in July - on Friday 15th our 'Park Life' evening will include rides around the deer park and talks from the wardens on the deer and other wildlife.
﻿﻿﻿﻿
﻿﻿
﻿﻿﻿﻿
﻿﻿﻿﻿
Posted by Joy Margerum at 14:34 No comments:

We started the week on Confluence Meadow, next to the confluence of the River Tern with the Severn. A sea of spear thistles needed to be dealt with before the seed heads mature; by cutting them at the base with a spade, we can prevent the seeds from spreading and joining the seed bank. Our Monday group got stuck in and we cleared the field in less than two hours. Then the team split into two; one group stayed with me to break up stone and spread it on the footpath that we are building under the Tern Bridge while the others headed to the deer park and cleared the vegetation that was growing through and over the park pale fence. Appearances are important and clearing the ivy, thistle and bracken off of the fence really keeps the traditional deer park fence looking smart.
On Monday evening I joined Bob Thurston and Mike Threadgold for the first of our annual pipistrelle bat counts. There is a maternity roost in the roof of one of our estate cottages and each year we do two counts in June and two in July to detemine the average number of bats using the site. The roost is actually the largest known pipistrelle maternity roost in the UK, so it is a fantastic thing to be part of it's ongoing surveillance. We gather just before dusk and sit quietly around the cottage, each person assigned one or two holes to watch and as each bat emerges to look for food, we click our counters. The roost usually numbers around 1000, although on that night we had just over 700 - it was quite a cool night which tends to put the bats off leaving the roost. There are three more counts to go so hopefully we will find higher numbers next time.
﻿﻿
Tuesday was spent preparing for a very special event - our﻿﻿﻿﻿﻿ annual Volunteer's Party. This year we decided on a barbecue to thank our volunteers for all their time and effort over the last 12 months and over 260 people came along to join the fun. The large marquee, 130 chairs, 20 tables, the barbecue, charcoal and gas bottles kept several of the wardens busy as we set up - all while trying to dodge the heaviest rain showers. Luckily the weather improved and we had a gorgeous dry evening; including entertainment from a local choir, a prize draw for all the volunteers and as much barbequed venison sausage, potato salad and trifle as they could eat! Everyone had a good time and no-one complained about my slop-the-trifle-in-the-bowl technique so once again, thanks everyone and lets do it again next year! 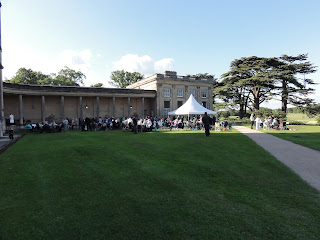 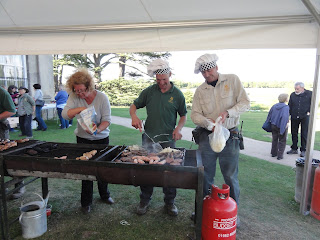 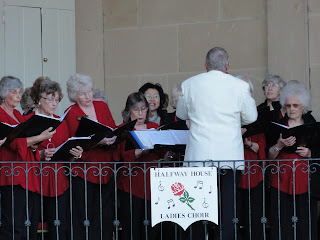 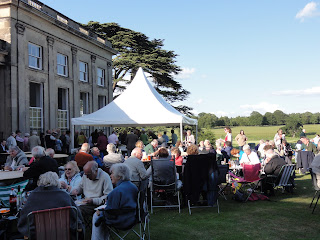 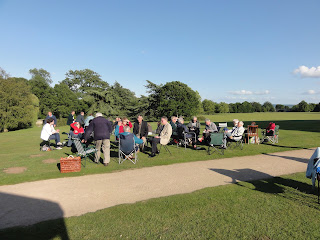 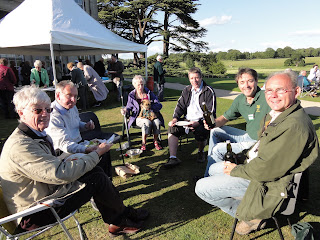 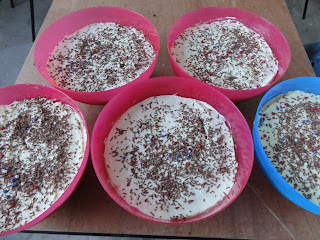 Posted by Joy Margerum at 15:26 No comments:

﻿ ﻿
The week kicked off with a VERY wet bank holiday (hurrah for the the garden/crops!) which I managed to avoid by spending a day in the office with a computer and well over 100 job applications to read - but thankfully the sun is back out now and we have had a great week. Our hardworking volunteers have been down on Tern meadow once more under the watchful eye of warden Richard, removing the old and broken fenceline in preparation for a new one and cutting back the willow and hawthorn that had overgrown it. It's a fiddly job separating the wire and staples from the old posts but these guys are becoming pros at it and cracking on in record speed - despite the photographic evidence to the contrary!
﻿﻿
On Thursday I worked alongside Susie Jones on a family activity day. Two local families joined us and a few of the regular warden volunteers to help us to resurface a path in the deer park woodland. It was hard work for all involved as they shovelled stone into wheelbarrows and spread it along the path but copious amounts of tea from the storm kettle and a good supply of biscuits and mini doughnuts (nice one Susie!) kept everyone in good spirits. We had a picnic lunch, admired Dougal the dog's biscuit-eating tricks and then rounded the day off with a tractor and trailer ride home via the deer park. While most of the deer were hiding away at the far end of the deer sanctuary (the fawns are due to be born at this time of year) there was a gang of bucks enjoying the sunshine near the Little Egg plantation and everyone had a good view of them. Thanks to everyone that came along and helped to make the path, hopefully we will see you again later in the year for apple picking! 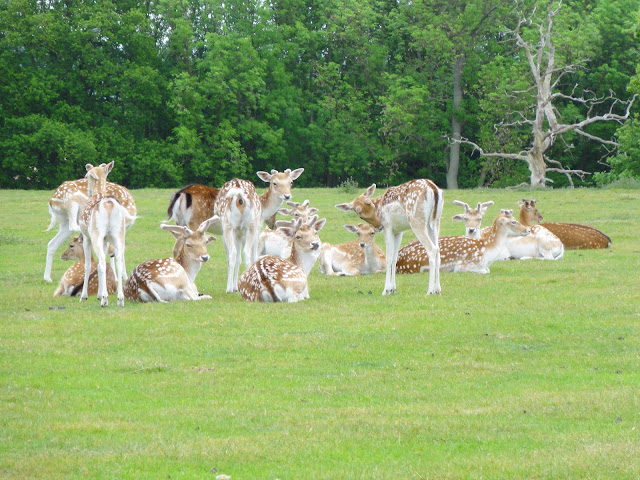 Posted by Joy Margerum at 17:07 No comments: