The days may be long but the hours are flying by! It has been an incredibly busy few weeks. We have finished rebuilding the chicken coop at Sunnycroft, built 6 stiles along the river to help the fisherman to access the bank, met with archaeologists specialising in WWII airfields, topped the front park, processed logs for next winter, weeded hedges, patrolled the river checking fishing permits, monitored the wildflowers and grasses on the river ground flood meadows, ran a guided walk around one of our farms on the evening of the Summer Solstice, set up the Sunnycroft fete tents, rescued the white shed from the bottom of the icehouse, went bracken bashing with other NT teams at Carding Mill Valley, counted bats on several evenings, managed ragwort and docks, helped the education department with their tractor rides, babysat some young eels and rescued a tawny owl. Phew!

The tawny owl was reported to us last Wednesday by several visitors who had come across it in the deer park. Ben and I went out with a prepared box and found it out on the open park in full sun, guarded by a couple who were making sure that no dogs came near it. I carefully picked him up but he gave no resistance, which set alarm bells ringing. We drove straight to Cuan House wildlife rescue in Much Wenlock, where he was admitted immediately and given rehydration fluids.

﻿﻿﻿﻿﻿﻿﻿﻿﻿﻿﻿ ﻿﻿﻿﻿﻿﻿﻿﻿﻿﻿﻿
The next day I called to see if it was making any progress and they told me that the vet had checked him over and found that he had conjunctivitis and the start of a throat infection - poor little thing! He is now on medication and we have everything crossed that he will make a full recovery and be able to be released back on to the deer park. I will keep you posted! My thanks again to all of the people that found and reported the owl, and that made sure it was safe until we could reach him. Futher thanks to the staff at Cuan House, who work so hard to help the local wildlife.

The deer are looking very well at the moment - fawns have been spotted already, and the bucks are in velvet (growing their antlers back). Many of the bucks are enjoying the sunshine and lying around in full view, perfect for taking a few pictures as you walk past as I did with a group of visiting Academy Rangers a few weeks ago: 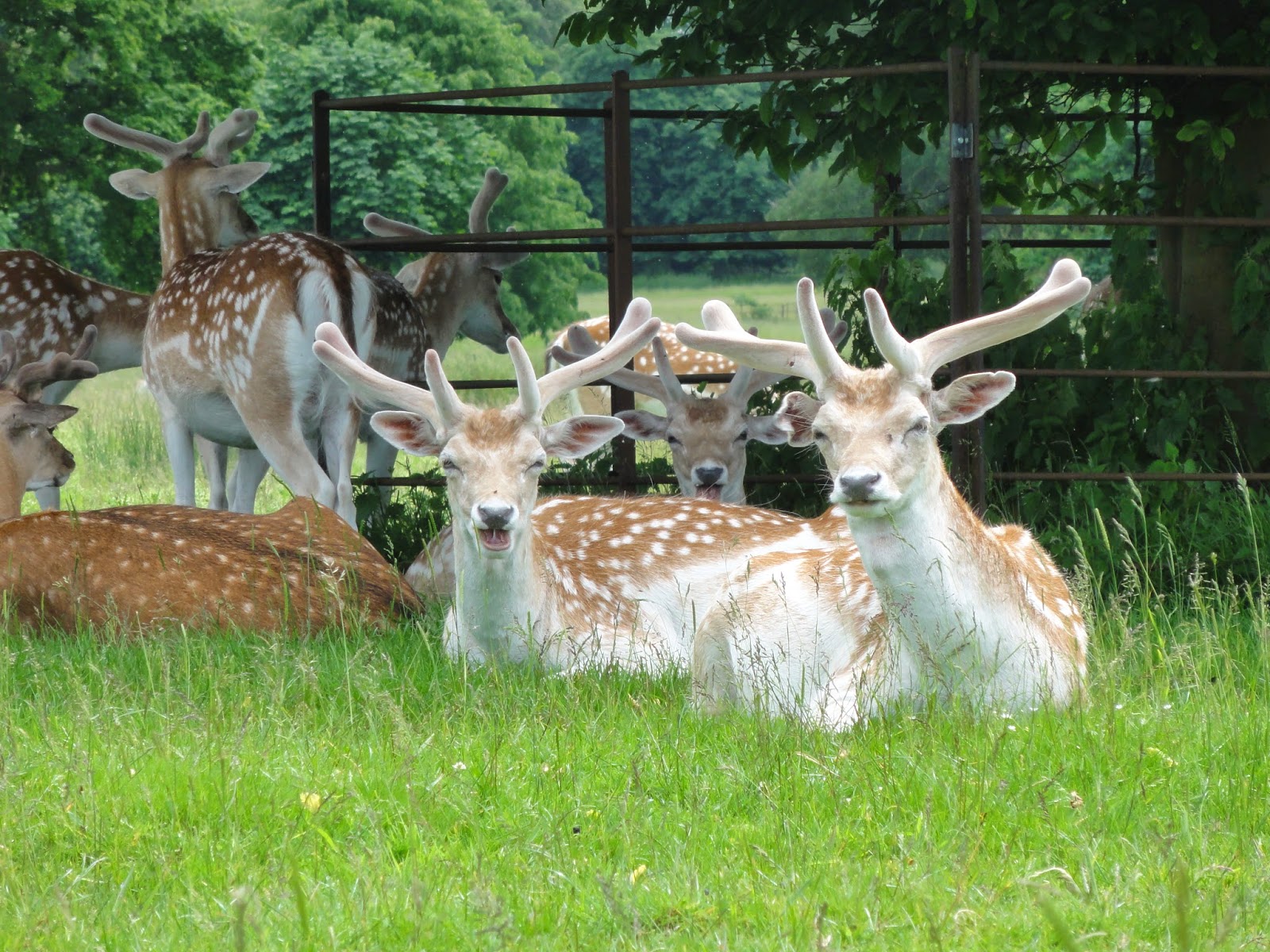 Posted by Joy Margerum at 11:49 No comments:

A closer look at the copper beech

After a day of felling piece by piece and another day of clearing and stump grinding, the beech has gone. We were relieved to see the inside of the tree as the rot was substantial - we definitely made the right call to remove this tree from such a populated area of the park. The ground will be levelled and seeded and left to recover, and hopefully the other beeches will now put on some growth and expand where before they were shaded out. Here are some pictures of the work: 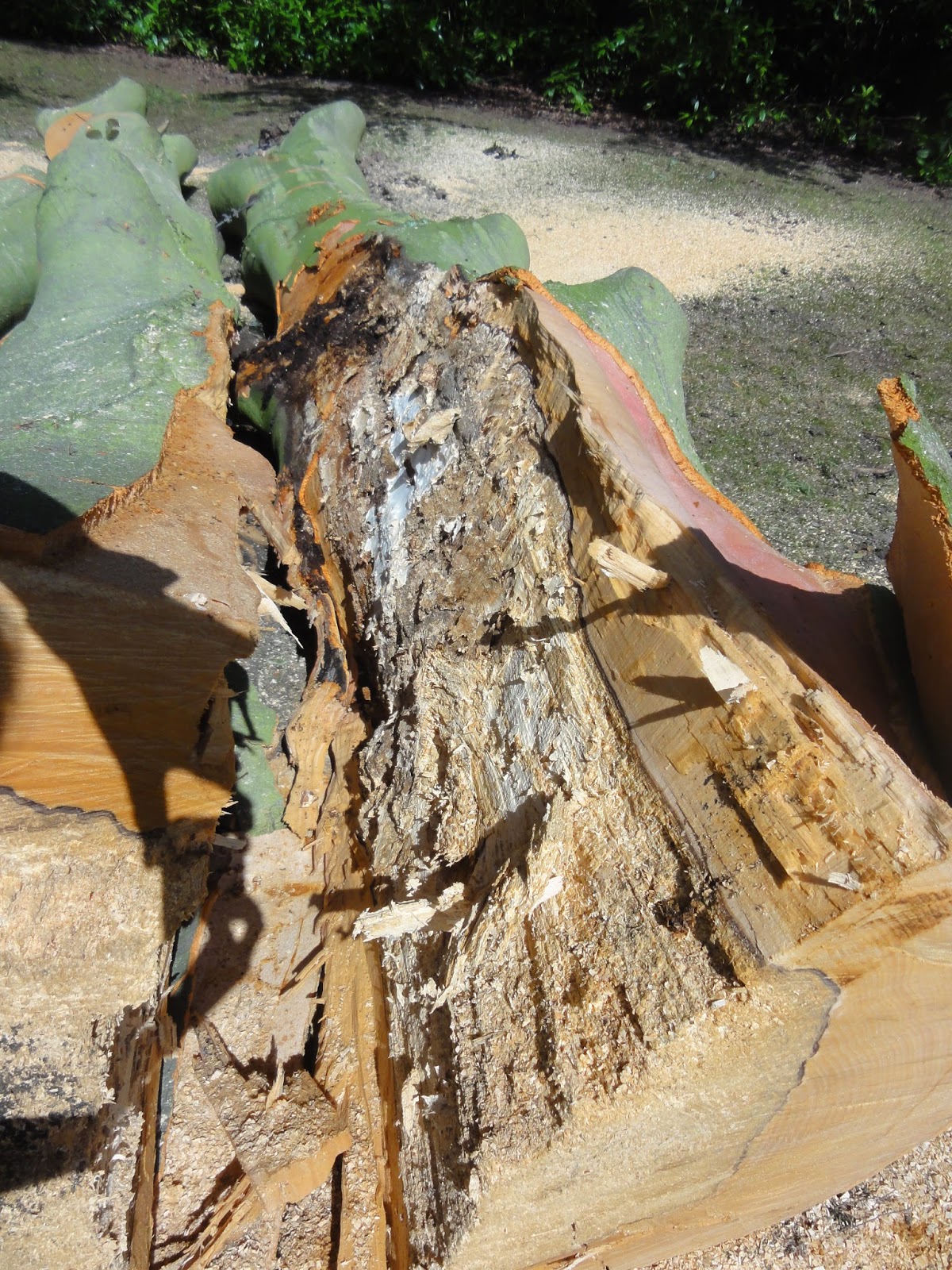 Posted by Joy Margerum at 22:25 No comments:

﻿ ﻿
Tomorrow we have the job of felling one of the beautiful copper beeches that you can see near the Clock Tower at the rear of the Mansion. This tree has been carefully monitored for many years as it has a structural fault in it; work has been carried out on it to aid it's stability over the years, included wire braces to help the tree to support its own weight and a reduction in the canopy to reduce the 'sail' quality. However, there are now signs of decay within the stem (leaking fluid and Ganoderma bracket fungus on both sides) and after consultation with an external tree expert, our fears were confirmed - for the safety of everyone at Attingham, this tree needs to come down. It is always a difficult decision - the tree could stand there happily for another 30 years BUT there is also a heightened risk of it failing and its position next to a main path in such a busy place as Attingham means that we cannot risk someone coming to harm. There is some small comfort in this one coming down - as well as ensuring no one can be hurt by it, it will open up the area for the other beeches to expand into and for future plantings. We will be closing access to the rear of the Mansion for a day while the tree is taken down piece by piece but expect the path to reopen by the end of the day.

﻿﻿﻿﻿ Last week saw some important tree work being carried out at Sunnycroft, our sister property just down the road in Wellington. A cherrypicker was hired to allow our tree surgeons (capably driven by Harper student Ben) to travel to the tops of the wonderful wellingtonias that line the dr﻿﻿﻿ive up to the house, cutting out dead branches and tidying up. The cutting back of a branch on another tree has been postponed as a bird is currently nesting right on the end of it, so we will return later on in the year.

Several days ago Senior warden Colin heard the cuckoo calling again and as he listened the cuckoo changed his call - the old poem is right!

Between the thunderstorms and downpours I have been nipping out to some of our ponds to watch the progress of some of our wildlife and this morning spotted a duck with three chicks and the first Emperor dragonfly on the pond in the Mile Meadow. We are also keeping a careful eye on the deer park as the fawns will begin to appear any day now. I know I repeat it a lot, but it is super important that fawns are not approached or touched in any way and that dogs are kept well away - so please keep to the paths! If you are lucky enough to spot a fawn, please let me know. The bucks look fantastic at the moment with their antlers in velvet and full summer coats, so bring your camera next time you are here for a walk in the park, you never know where they might be sunning themselves near a path.

Posted by Joy Margerum at 13:53 No comments: