Fruiting bodies that can lead to felling

This week we said goodbye to one of our beech trees along the Mile Walk as it had to be felled for safety reasons. This tree had been showing signs of ill health for several years, dying back in the crown and dropping smaller branches, but this year several fungal fruiting bodies appeared and the decision was made.

Fungi on trees doesn't necessarily mean bad news but the two found around the base of this tree - Kretzschmaria deusta and Meripilus giganteus - unfortunately are. These fungi can enter through the root system and cause extensive decay in the roots and base of a tree without showing many obvious symptoms at first. When Meripilus does show a fruiting body you see large clusters of brackets at the base of the tree or near the base of it if the roots are affected. Kretzschmaria is harder to spot, showing as patches of black, bumpy, coal-like crust on the bark around the base or in the buttresses. Our beech tree had been struggling for a while because the damaged roots meant that water and nutrients were not able to travel up to the crown. These fungi break down the cellulose and lignin, structural components in the tree, leaving the tree severely weakened - trees with these fungi often fail at the roots and fall over in winds.

One of our Parkland Gardeners, Matt, is qualified to fell large trees and he took the job on, bringing the tree safely down and exposing the internal decay. 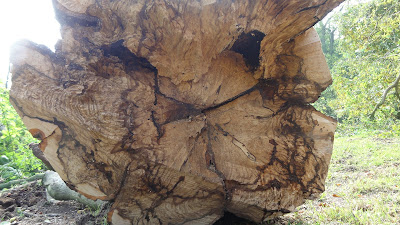 In other news the hedgelaying teams are doing well, though the warm weather can make it hard work in all the layers that we wear to protect ourselves from the thorns! 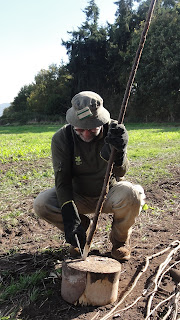 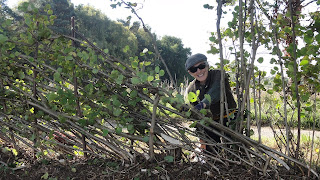 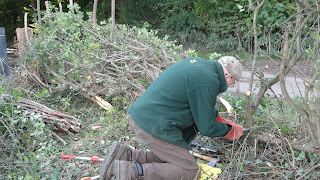 Posted by Joy Margerum at 14:48 No comments: 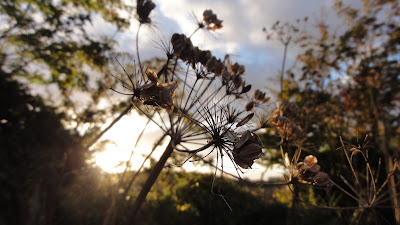 The deer park is a hive of activity at the moment as the rut is in full swing. The bucks can be seen and heard 'groaning', the grunting call that attracts females and warns other males away - as the rut progresses the groaning becomes shorter and higher pitched as they call themselves hoarse. The bucks may also be seen fighting as they compete for females. Their antlers clashing can be heard from far away and the sight of two or more bucks battling it out is a sight to be seen. It is a very important season for the deer so we are urging everyone more than ever to stick to the paths and not go in for a closer look, both for your safety (you don't want to be anywhere near those antlers!) and to ensure that mating is not interrupted. The deer are spread all over the park as the males hold their rutting stands so if you follow the WWII walk you are bound to see or hear something!

The fantastic weather has continued and we have had a busy weekend with many people enjoying a picnic in the sun or playing rugby in the sport field. The warm weather has kept many insects on the wing later than usual and on today's guided walk we spotted hawker and common darter dragonflies in the deer park.

Earlier this week the wardens were kept busy managing the trees and hedge at the entrance to Confluence Meadow, preparing a hedge along Smethcote lane for laying and continuing with the tree inspections across the estate. I've also been busy sniffing out more fungi so here are a few more to share with you - I'm trying harder than ever with my identification skills but if you know your stuff and can offer any corrections then please do leave a comment!

Posted by Joy Margerum at 17:52 No comments:

Well, September passed a bit quickly! I was lucky enough to spend four days last month at Fountains Abbey on a course and it is truly spectacular - well worth a visit if you are heading to Yorkshire on your holidays.

Last weekend saw the Attingham Harvest Fair in full swing - two days of displays, demonstrations, food and music all in glorious sunshine. Much of the event was based in the Walled Garden with stalls, cookery demonstrations, apple pressing and produce. The Estate team were based in the paddock with a range of tractors to admire, produce from all over the estate (including grains, vegetables and two tonnes of Lady Claire potatoes!), logs, milled timber and Phil and Ben brought their pole lathes and shave horses to give green woodworking demos. Demonstrations with the timber crane drew the crowds (with some serious demos of loading and unloading wood as well as building log round towers and dropping freshly-turned wooden eggs into cups!) but I fear that our 'cute' appeal was lost in comparison to the Home Farm display with the tiny Shetland foal! 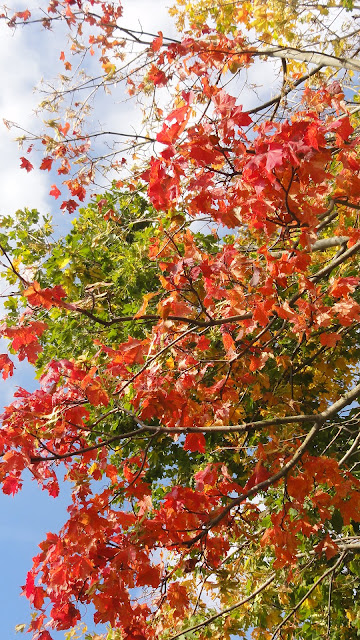 The autumn colours are appearing in the trees now and fresh fungi are popping up all over the place - here are a few pictures of natures riot of colour. Enjoy!

Posted by Joy Margerum at 10:08 No comments: