Last week of the holidays

Just a quick update on what we have been doing over the last week or so. The bank holiday was very busy again here at Attingham, with archery, canoeing and Trusty Tuesday club bringing in the crowds. The wardens have been keeping everything running smoothly in the car park, juggling tents and events, and also continuing with the small mammal monitoring that Jess wrote about in the last post. This week we have been concentrating on two new projects - repairing the deer park fence where it was damaged by a car and  creating the new coach park area as part of the stables and visitor reception regeneration. Path preparation will also be a focus for the next few days as the Great British Walk starts this weekend, so come along for a chance to see some different spaces!

Jess and Paige (our student research intern) have been busy setting up a survey and monitoring of small mammals in the Park. Such monitoring is important as it allows us to observe rises and declines in populations. Currently there has been an alarming 75% decrease in small mammals across the UK - we need to find out if the same trend is apparent on our land. Small mammals such as voles, shrews and mice are important species and an indicator of habitat health - a decline in their numbers could have a big impact on other species such as the Barn Owl, which depends on them for food. Surveying is carried out using live trapping and the animals are released back into their territory as soon as we record the species. 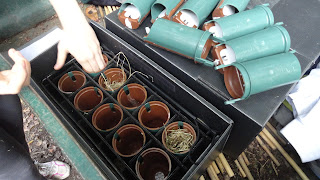 The traps are filled with hay to make comfortable bedding for the night. Small mammals (and especially shrews) need to eat every few hours due to their high metabolism so several foods are also included in each trap - blowfly pupae (for the carnivores), a seed mix for the vegetarians and some chopped apple to provide water. 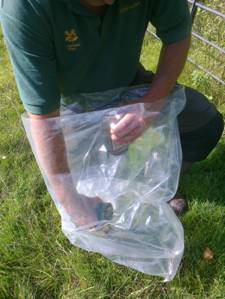 When emptying the triggered traps to see what has been caught, a large bag is used to stop the creatures escaping before we can identify them.The species, age and sex is noted. They are handled by a method called 'scruffing'﻿ - it may sound rough but it is simply holding them by the back of the neck, much like puupies and kittens, to examine them. 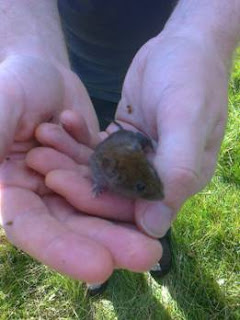 Above is a male field vole Microtus agrestis, identifiable by their large hind feet, short tail and grey/brown fur. 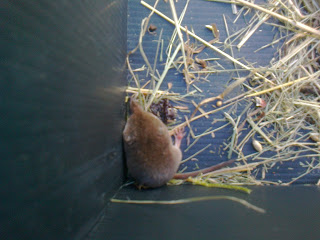 Above is one of the three common shrews Sorex araneus we caught. They have small eyes and a pointy, mobile snout. We also foudn a pygmy shrew, which is darker in colour and smaller than the common, but with a tail longer in proportion to its body.

Thank you Jess and Paige for the insight into their work! The monitoring will continue this bank holiday weekend.
Posted by Joy Margerum at 15:38 No comments: 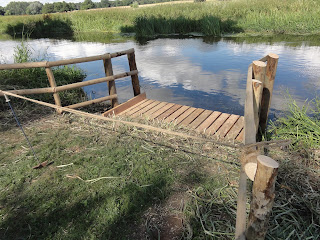 Fancy a paddle along the Tern? Over the next few weeks you will be able to hire canoes or take part on a guided river tour on special days, all starting on the new jetty that the wardens built this week. On Thursday 8th August you can hire a canoe for £10 per hour, between 11am and 5pm; all equipment and safety instruction will be given by Drummond Outdoors. It will be first come, first served!

We build the jetty in stages. On day 1, a team built the frame and treadboards. On Monday Jess and I donned our chest waders and cleared the riverbank of reeds and weeds, then I used the JCB to drive chestnut posts into the riverbed to fix the jetty to. Finally on Tuesday we lifted the jetty into place, drilled and bolted it together, then built handrails to help people to step down onto the platform. Finally, some of the team tested it for sturdiness - it passed! 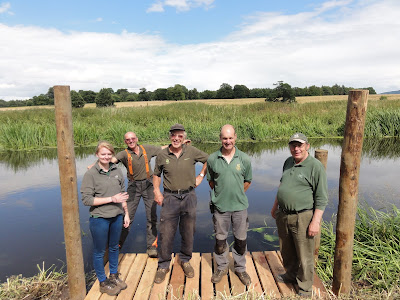 Posted by Joy Margerum at 16:21 No comments: