The weekend before last included the annual Carriage Parade event. Unfortunately the weather was against us on the day with gales and rain predicted, so only seven teams took part and the route was shortened to end early. The weekend wardens were on hand to help man the gates on the front and back drives as the horses moved out and in, as well as a spot of cow herding to ensure that the cattle and horses remained as far apart as possible. Despite the miserable weather our hardier visitors still turned out to watch the parade and to meet the heavy horses on show by the mansion. The horses looked fantastic and the event really helped the imagination to picture how the park would have looked with carriages coming to and fro as they did for so many decades. 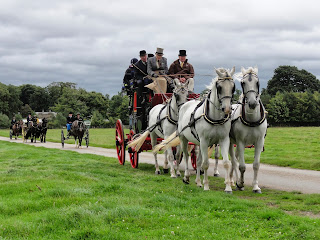 For the last two days I have been at Charlecote Park in Warwick attending a tree safety course. Trees in public and heavily visited areas have to be regularly monitored and managed to make them as safe as possible so I have been learning how the Trust carries out these surveys and what to look for. Its a long and sometimes complicated task but absolutely essential, so I hope to be able to assist my manager in future surveys to further my knowledge and experience until I am ready to take them on myself. Charlecote is a beautiful property with some wonderful veteran trees (and another herd of fallow deer) - I would thoroughly recommend a visit! 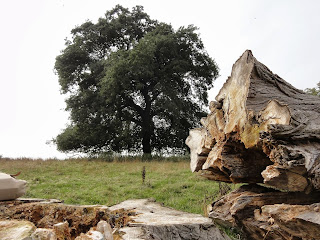 We are now busily preparing for this weeks big event - the Harvest Fair and Uncovered weekend. The harvest fair will be based in the walled garden and orchard where there will be stalls, displays and apple pressing - at the moment it is worth a visit just to see the amazing array of pumpkins and squashes that the gardeners have been busy growing! Uncovered weekend will give you the chance to see what produce is made and taken from the whole estate and explores the theme of sustainability. There will be timber milling and horses pulling timber from the woodland, talks and demonstrations, guided walks and 'deer unmaking'. Curious? Then come along this weekend - see the main website for more details.
Finally I would like to say a few words to two of our team who have finished their time with us, at least for now: Milly has returned to Harper Adams University to complete her final year and Craig has finished his Passport To Your Future training. We hope that we will see them both again soon, and want to say a massive thank you for the hard work and dedication displayed by both - it really isn't the same without them, and they are sorely missed! 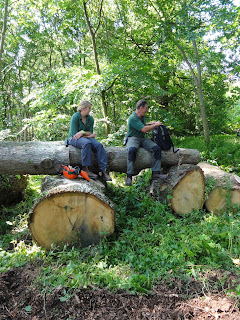 Chilly air, hanging mists at dawn and wardens wearing fleeces can mean only one thing - autumn is here. It is my favourite of all seasons (although it does hail the end of the dragonfly season, which is sad for me but good for anyone that has had enough of the endless photographs!). As the season changes, so do our tasks. Over the next few weeks we will finish fencing, mowing and monitoring flora and fauna and begin the autumn and winter tasks of planting, hedgelaying and coppicing.

For now though, we finish the last of the summer jobs. The deer fence repair is now complete, using a combination of new and reused cleft oak - it will take a while for the fresh oak to weather and fade into grey. The volunteer team did a great job finishing off the pales so thank you! 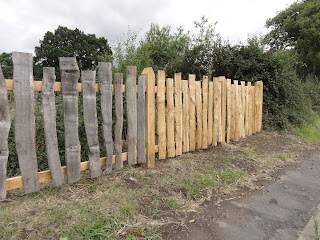 Over the last few weeks, Chris Wittles has continued with his bird ringing on various sites across the estate, sharing his finds with us to give us a better picture of the species and their populations that we have here. He has been experimenting with using recorded bird calls to see if different species respond to them and when I arrived (very) early last Thursday he had just caught and ringed three Black caps - they had been seeing and hearing them fly by for weeks without actually catching any in the nets. The recording seemed to work that day! Once ringed, the little birds were immediately released and went soaring back down the river. 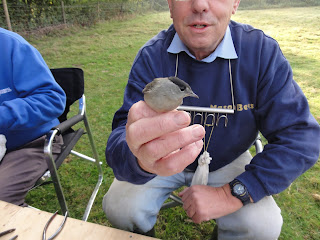 Now that the children have gone back to school we have been doing some maintenance in the play area on quieter days. The large log pile has been repainted with grip paint and a new layer of woodchip spread around it; the climbable 'cube' has been restocked with wood and new rope attached; the vehicle gate has been covered with mesh to prevent little ones from climbing over. Next jobs will include more grip paint on the balance logs and repairing the fence where a tree has fallen over it - so far it has provided a wonderful climbing frame but the time has come for a tidy up! 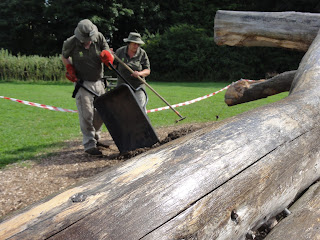 Keep an eye out as you walk along any hedges with Dog Rose growing in them - the Robin's Pincushions are starting to turn scarlet, another sign of the oncoming autumn. I spotted five on one plant earlier today. These beautiful abnormalities are caused by the gall wasp Diplolepsis rosae which burrows in to the stem or leaf of the dog rose plant and causes the plant to react by growing excess cells into these wispy little balls. There are some growing on the Ice House roses too so keep an eye out for them. 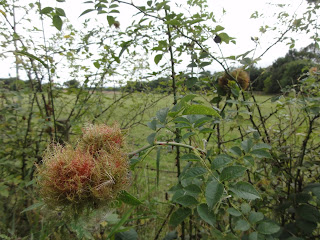 Finally, one last dragonfly to see you through the winter - a male common darter on the Mile Meadow pond. I promise no more for a while! 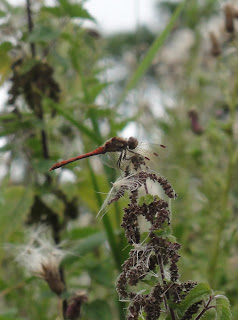 Posted by Joy Margerum at 16:42 No comments:

Another sunny day in the Deer Park 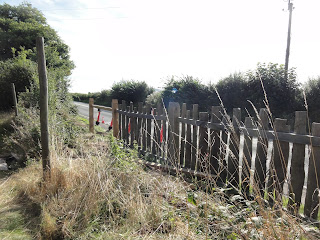 It's September already but the summer is holding on with another day of sunshine. Today the team donned their high vis vests and continued the deer fence repair, digging in the oak posts and fitting the rails that our cleft oak pales will attach to. The ground in this area is packed hard and full of stones, so digging in the heat was no easy task! Tomorrow I expect us to finish the whole job, though it will take a while before the oak ages and blends in with the rest of the fence.

While we measured by the posts for cutting this little beauty landed next to me and posed for some pictures - I believe it to be a teneral (immature) female common darter but if anyone knows better then please let me know - I'm still learning! 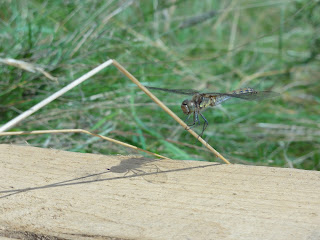 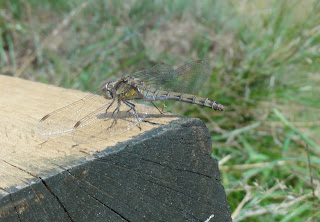 Our new walk opened on Sunday as part of the  Great British Walk - Attingham is proud to be one of 10 properties offering a 'secret' walk to a previously unreachable location. The wardens played a big part in getting the walk ready and have even starred in the photographs and interviews that you may have seen in the Times, Telegraph and Daily Mail. Feedback so far has been great - have any of you seen where it takes you yet?
Finally, has anyone else noticed what the bees have been up to on the side of the mansion? This has been steadily growing over the last few weeks on the east side, near the Orangery. My little compact camera couldn't zoom enough to get a decent shot (it's very high up) but luckily our volunteer photographer Sean took some great close ups - I can't wait to see how much  bigger it gets! 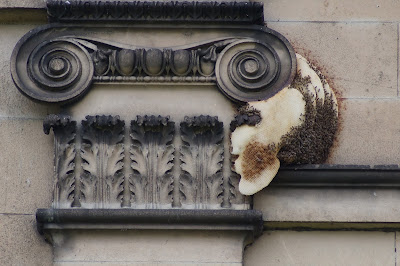 Posted by Joy Margerum at 22:52 No comments: